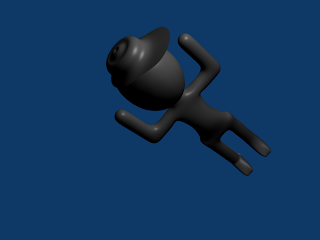 After finishing going through The Red Book and trying to start writing a small interactive scene, I immediately knew that raw OpenGL would take way too long to use in a game. I'd need an engine instead. For one thing, trying to create detailed models and scenes in a graphics API like OpenGL is probably impossible, not to mention really stupid, what with all the powerful tools out there. It'd probably take a month to perfect a single model that way. And no, I never seriously considered doing so.

So I knew I either had to use an engine made by someone else, or make my own. From looking at some game engines that other people have spent some time on, and discussions on the Internet among game designers, I know that as a graphics and game design noob, creating my own engine would be purely educational. Meaning it would inevitably suck. Now I'm glad I learned the basics of OpenGL, since it taught me a bunch of important 3d graphics concepts. But it's one thing to learn basic concepts and another to spend months of my life trying to piece together a decent 3d game engine. Since my goal is to be creative rather than travel these much trodden roads, it wasn't a hard decision to use someone else's engine.

I'd heard of the 3d engine Irrlicht before, and it seems very simple to use. So I'm gonna do that. Another one is OGRE, which sounds more powerful but with a higher learning curve.

More important is the ability to import 3d models into the engine, definitely one of my favorite features. The free 3d design program Blender is quite popular. It falls under the category of apps like Maya and 3d studio max but is free. And there's a really nifty tool called irrb which converts blender scenes and data to Irrlicht format. Perfect! (I used Blender to make the crappy "yo man" pic at the top of this post, following the "Blender 3d: Noob to Pro" tutorial. It didn't take very long at all. I have to say, though, learning Blender requires patience, as the interface is loaded with options and hotkeys and it's important to memorize these things.)

Furthermore, there's an effort to port Irrlicht to the Wii -- Wiirrlicht. Sweet.

Unfortunately on platforms like Android, it's gonna be a little harder to find a free engine to use, so I'll probably have to end up hacking together a simple one when I get serious about coding for that. I think iPhone has a few 3d engines to choose from though. Hopefully following the release of the Android 1.5 NDK, we'll see more useful engines ported over.
Posted by TalkLittle at 9:14 PM